Get help with products

Stuck on how to use one of our products?
Not sure how to clean them?
Find all the useful support information right here.

Thanks for purchasing a Tommee Tippee Easiflow® 360° Cup. This product support page is here to help you use it safely, to let you know how to clean and take care of it, and to answer any questions you may have.

For your child’s safety and health… 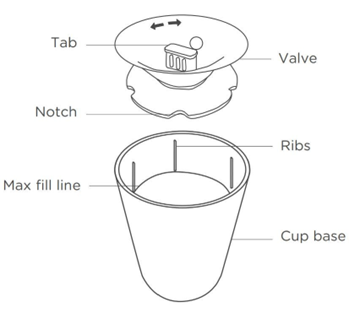 Before Using Your Easiflow® 360° Cup

Before first use, gently push the cup's vent with your finger to ensure it isn’t sealed shut (as shown below).

Simply remove the valve from the cup and wash both in warm soapy water. Dry thoroughly and leave disassembled until you’re ready to use your cup again.

Can I put my Easiflow™ 360° Cup in the dishwasher?

Yes, the cup and valve can go on the top shelf of your dishwasher.

Yes you can. But it’s only suitable for cold water sterilisation, following the manufacturer’s instructions. Do not sterilise by boiling, steam or microwave, these will damage the cup.

No. The Easiflow™ 360° Cup is not suitable for the microwave.

As with other things around the kitchen, your cup can become stained and yucky-looking in the dishwasher or even when you hand wash it (blame that Bolognese sauce or carrot soup). Don’t worry, it is still perfectly safe to use.

Can I warm liquids using the Easiflow™ 360° Cup?

No, the Easiflow™ 360° Cup is not suitable for a microwave oven, conventional oven or any other heating device. We also only recommend cold liquids.